Ana Rodríguez-Granell participates in this book with the chapter “When Criticism Meets Gangster Films: The Spiv Cycle as Oppositional Aesthetics in Postwar Britain” 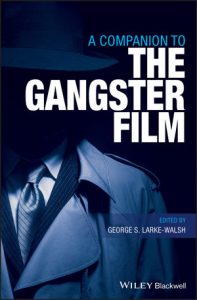 This paper focuses on an overlooked period of film history between the brilliant 1930s and the film modernism to come in the late 1950s, a time when critical and militant manifestations in British cinema were co-opted into the institutional narrative of quality film. Following World War II and the rise of Labour’s social democracy, realism became the bedrock of British national cinema as part of the country’s cultural rebuilding. In this context, and given the efforts invested in the war and the institutionalisation of realism exemplified by Millions Like Us (Sidney Gilliat & Frank Launder, 1943), what had been a period of political exaltation gave way to a dismembering of the avant-garde practices and the critical militant documentalism that had represented the working class. Faced with official cinematographic discourses that tried to temper the radical spirit of the pre-war years, calls came for narratives that expressed civil responsibility, civic sense, compassion and rectitude, or ‘hopeful and clear-eyed’ narratives. This paper seeks to examine how gangster and spiv films provide a subaltern representation of the British working class. It will analyse the political economy of post-war British gangster films, popular cinema and certain sectors of the industry as a forum for challenging institutional aesthetics. The influences from the 1930s, oppositional discourse and the sparks of modernity in gangster films such as Waterloo Road (Sidney Gilliat, 1944), They Made Me a Fugitive (Alberto Cavalcanti, 1947), and It Always Rains on Sunday (Robert Hamer, 1947) will be examined. This will be done to determine if this kind of film, which led to sub-genres of social criticism, may be deemed a vehicle for vernacular modernism.