Pau Waelder publishes “Memory Lane“, a text for the exposition of the same title by the artist Felix Luque at the Espacio Fundación Telefónica (Lima, Perú)

Memory Lane starts from an exploration of childhood and youth memories of Félix Luque and Íñigo Bilbao on the coasts of Ribadesella and Llanes (Asturias), which translates into a digitalization of forests, beaches and rocks using 3D scanning technologies. Through digital devices they obtain an enormously detailed reproduction of those places and at the same time a ghostly, distant and incomplete image, which gradually becomes a fiction. Together with Damien Gernay, the three artists elaborate a particular imitation of nature, in which it is simultaneously captured with the greatest precision allowed by current technology and converted into something consciously artificial.

The sculptural work and the physical presence of the pieces acquire a particular importance, since they show us how artists, by converting nature into data, have been able to recreate it according to their own parameters. 3D modeling software, numerically controlled CNC (CNC) milling machines and the robotic and electronic systems they have built give them the ability to create an entirely different reality.

As a whole, the pieces that are part of this project elaborate a fiction with consciously implausible elements that start from real places, with a deep meaning for artists, but they are abstracted to the point of configuring a parallel reality, with a language and a specific behaviors, which no longer belong as much to the humans who have imagined them as to the machines that have shaped them. 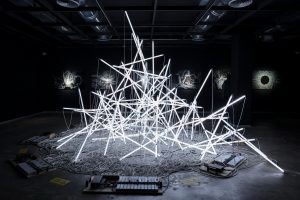