Laia Blasco-Soplon makes one of the posters of the GUNi International Conference.

This GUNi International Conference aims to be an international meeting to debate on the role of the humanities, and the interrelation between humanities, science and technology in the 21st Century with a special focus on Higher Education. The main objective of the Conference is to open a worldwide debate on the current role of humanities in the social, academic and scientific areas and on their importance to boost a more equitable, more responsible and more democratic society. The event has gathered 160 attendees from 22 countries and from diverse areas of knowledge and fields (education, research, public institutions, organizations) in order to debate on the role of the humanities in the world. The Conference was held on the 19th to 20th November 2018 at the CosmoCaixa Museum in Barcelona. 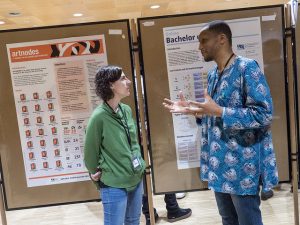